Tick-borne Lyme disease was once a fair-weather foe, but has now become a year-round threat because of wildlife migration changes and the ever-warming climate. Learn how to protect your pet and yourself from this debilitating condition with this guide from the Animal Hospital of Stoney Creek.

What is Lyme disease in pets?

Lyme disease is a vector-borne bacterial infection caused by the bacterium Borrelia burgdorferi. The blacklegged tick (i.e., deer tick), which is found throughout the province, is the primary Lyme disease vector or carrier. Disease is transmitted when an infected blacklegged tick attaches (i.e., bites) and feeds on a warm-blooded mammal (e.g., deer, mice, humans, dogs, or horses). The bacteria enter the general circulation and trigger chronic health issues, including painful joint swelling and inflammation, heart damage, kidney failure, and neurologic problems.

How common is Lyme disease in Ontario?

Lyme disease cases in humans have steadily increased in the province over the past several years. In 2017, human Lyme disease numbers tripled—1,003 probable and confirmed cases compared with 313 in the previous year—and highlighted the need for increased public awareness. According to Public Health Ontario, Lyme disease is especially prevalent along the eastern border, and Hamilton and its surrounding communities are now classified as risk areas on the 2022 Lyme Disease surveillance map.

Lyme Disease is likely to continue expanding in range and growing in frequency as average annual temperatures rise and ticks stay active for longer periods.

Is my pet at risk for Lyme disease?

Lyme disease is known to affect humans, horses, and dogs. And, although the disease has never been confirmed in cats outside a laboratory setting, cats should be considered at-risk as a preventive measure.

Ticks are mobile parasites and can hitch a ride on clothing, bags, or shoes, so all pets in the province—including indoor-only cats—are considered at risk for Lyme disease, and should receive year-round parasite prevention.

Can I pause my pet’s tick prevention in the winter months?

While you would think that a tick would be unlikely to brave a Canadian winter, these tiny arachnids emerge from hiding any time the temperature climbs above freezing. As climate change progressively shortens our cold season and more winter days are mild, pets are at an ever-increasing Lyme disease risk. Because only a single tick bite can transmit Lyme disease, we recommend continuous parasite prevention for year-round protection and peace of mind.

What are Lyme disease signs in pets?

Lyme disease-affected pets do not develop the classic bullseye rash seen in humans. In fact, many pets show no signs at all, or their signs are often vague and nonspecific, which sometimes results in an incorrect or delayed diagnosis. At the Animal Hospital of Stoney Creek, in-house Lyme disease testing (i.e., a blood test) is advised for pets with clinical signs that include:

Because Lyme disease signs can come and go or be entirely absent, we recommend dogs be tested annually for tick-borne diseases, which involves a simple blood test similar to their yearly heartworm test.

How is Lyme disease treated in pets?

If Lyme disease progresses undetected or untreated, neurologic signs, including seizures, are common, as well as kidney failure, which is often fatal.

What can I do to minimize my pet’s Lyme disease risk?

Lyme disease prevention begins with tick prevention. The Animal Hospital of Stoney Creek team recommends tick preventives for all household pets year-round, including the winter months. The preventives work by repelling ticks or killing ticks after they bite. Most veterinarian-prescribed preventives kill ticks only a few hours after the initial bite, preventing disease transmission, which requires 24 to 48 hours of attachment.

A canine Lyme disease vaccine also is available and recommended for at-risk dogs, including those who live, hunt, or frequently visit wooded areas where ticks are common. This vaccine is not a preventive replacement, but a way to more comprehensively protect vulnerable pets.

After spending any time outdoors, ensure you perform a tick-check to locate and remove crawling or attached ticks. Learn how to safely remove an attached tick here.

How can I reduce my pet’s exposure to ticks in the environment? 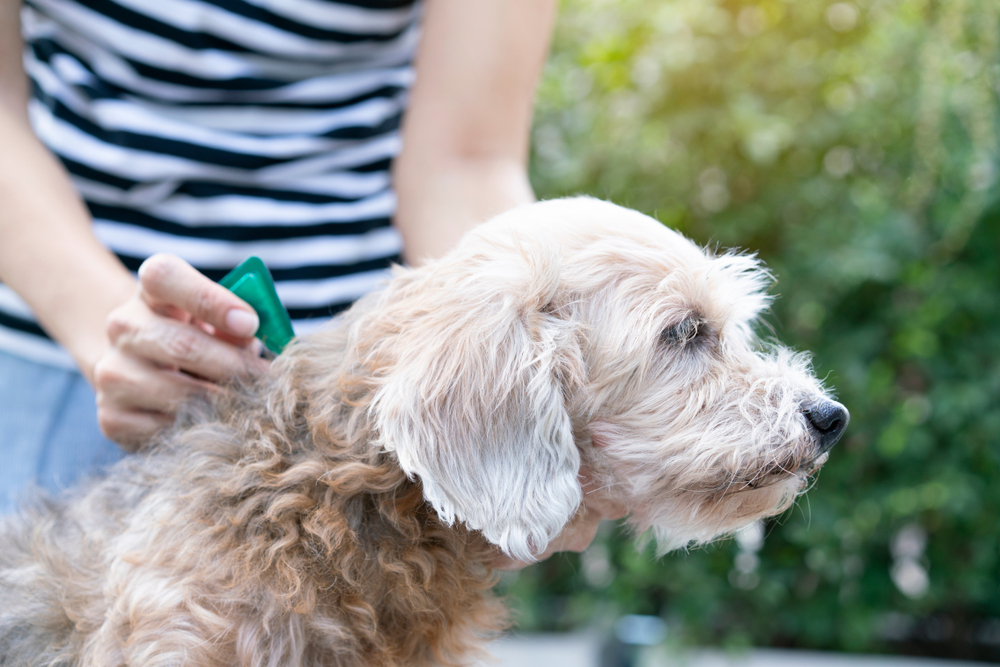 Blacklegged ticks prefer wooded and brushy areas, so keep the areas around your home free from tall grasses, weeds, and leafy debris, and keep wood piles covered and away from the home whenever possible. Remove wildlife feeding stations and unfenced vegetation or gardens that may attract white tailed deer—the blacklegged tick’s preferred host.

Lyme disease has officially arrived in our area, and like any unwelcome guest, the disease shows no signs of leaving. Year-round parasite prevention, environmental management, and diligent monitoring are the best way to protect your pet—and yourself—from this debilitating disease.

If your pet isn’t currently receiving parasite prevention, or if they are due for their annual screening test, contact the Animal Hospital of Stoney Creek.

About the Author: Animal Hospital of Stoney Creek